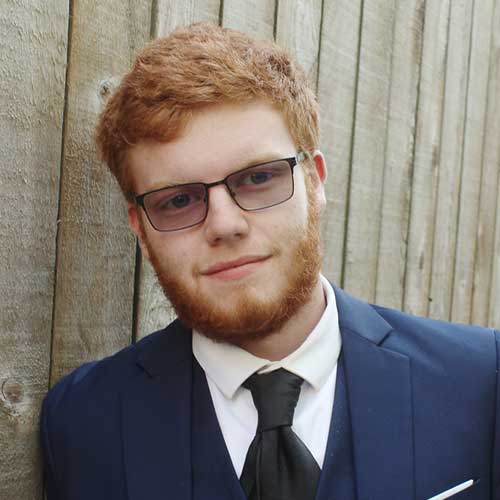 2022 Amazing Kids - Molalla
Age: 18
School: Molalla High School
Hometown: Molalla
WHY HE IS AMAZING: Tanner is invested in many school and community organizations that make Molalla a better place.

A COMMITMENT TO COMMUNITY AND LEADERSHIP

Adaptable. That’s one word Tanner Foss-Howard would use to describe himself.

He prides himself on his ability to overcome challenges and learn new skills. He credits this adaptability to growing up in Molalla and the variety of experiences he’s had there.

Through volunteer work, he’s put these skills to the test to become a leader both in school and within his community.

Foss-Howard grew up next door to the Molalla Area Historical Society, where he and his cousins began volunteering when he was 10 years old. He would come over each Saturday and help out with whatever tasks were needed at the museum and, as the years went on, took on even more responsibilities there.

Foss-Howard volunteered for six or seven years there before the COVID-19 pandemic shut the museum down, and he got wrapped up in other school activities. Iris Riley, the historical society’s president, nominated Foss-Howard after years of watching him grow up through his volunteer work at MAHS.

“He tends to be very friendly and outgoing,” Riley said. “He’s really good at organizing people, I was really pleased to see him develop that aspect of his personality.”

The experience stuck with Foss-Howard, and he said it opened the door to connections in his community and drove his passion for other community service projects in the future.

Since then, Foss-Howard has been involved in the community in other ways. He makes sure to volunteer any time the high school hosts a blood drive and recently began attending Molalla’s Beautification and Culture Committee meetings. He is also the president of his school’s Future Business Leaders of America Club, which has inspired him to pursue a career in business.

Although Foss-Howard had always seen himself as a quiet, self-described nerdy kid, something changed in middle school when he recognized a desire to step outside his comfort zone and join the middle school leadership club in eighth grade.

He joined leadership in eighth grade, becoming a class officer his freshman year. He was elected junior class president, though much of his duties were put on hold due to the pandemic.

“My main goal (during that time) was just to represent the junior class in student government,” he said, and to be prepared in case students returned to school, which it did in the latter part of the year.

During the pandemic, he supported his peers while they all navigated distance learning and a particularly challenging math class.

“I was just helping a few of my friends informally,” he said, “and I was just trying to strive to get them through the difficulties of online learning.”

That’s something that Riley, his nominator, admires about Foss-Howard: his willingness to help anyone in a time of need, regardless of his current circumstances or busy schedule.
“I know he’s had a real positive impact on his fellow students and the community-at-large,” she said.

In a culmination of his four years of experience in student politics, he ran, and was elected, student body president of MHS. Foss-Howard sees himself as a listener more than a leader but wanted to challenge himself and work on his public speaking.

As student body president, Foss-Howard organizes school events and played a significant role in this year’s Share the Love fundraiser, which supports local families in need, as the merchandise coordinator. His role alone contributed $15,000 to the $114,000 raised this year.

“I don’t do it to brag, or to try to be the best,” he said. “I do it for the experience to better myself and to try to better the rest of the community.”

As this high school senior looks toward graduation and beyond, he’s unsure what the future holds. He plans to study business at the University of Oregon but maybe step away from student politics. While this is a significant change from growing up in a rural town, he said he’ll be able to adapt thanks to the opportunities he’s been given by his teachers and mentors.

“I’m looking forward to getting out there, in the world,” Foss-Howard said. “I do love Molalla and everything this community has given me. I think there’s such a strong bond in this community, but I’m excited to see the world.”