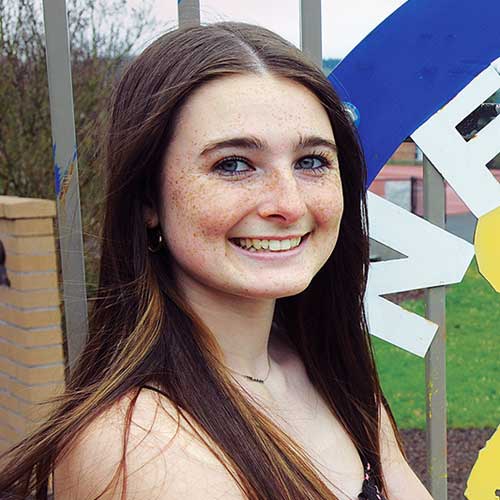 BEARING WITNESS TO SCHOOL BOARD HISTORY

Maddi Klink may be small, but her presence in the community continues to grow.
The 17-year-old Newberg High School junior is the Graphic’s Amazing Kid for 2022 and for good reason.

“Maddie is serving as one of the student representatives for the Newberg school board,” district communications director Gregg Koskela said in nominating Klink.

“In a time of much tension, she has been a calm, clear voice advocating for her peers. She is working with students and others to figure out resources and solutions to reduce bullying in our schools. She’s done a fantastic job!”

Klink was named one of two student reps in November 2021 and has witnessed perhaps the most tumultuous time the Newberg school board has ever endured. She bore witness as controversy erupted in July 2021 when the conservative majority of the board adopted a ban on Black Lives Matter and Gay Pride symbols in classrooms. Lawsuits, angry protests and condemnation of the action brought scrutiny on a national level.

“I think throwing yourself in the middle of something chaotic is where you’re going to make the biggest impact,” she said. “It’s important to get involved, especially when things start to get messy, because most people want to run from that.”

Klink says her time on the board has proven valuable despite the rancor.

“I’ve learned that you don’t need to agree with your peers, however you need to listen to them,” she said. “I’ve learned that some people are selfish and can only see their own agenda ahead of them, whether it’s the most beneficial one or not. Children are fragile and so easily impressionable, which makes it extremely important to put all feelings aside and just do what’s best for them. Ultimately, that is what our school board has failed to do time and time again.”

However, she does not see a future for herself in politics. Her plans include attending college to continue her track and field career as a sprinter. Academically, she is leaning toward jurisprudence.

“I would also like to study pre-law and one day become an attorney,” Klink said. “I think it’s important to speak up for those who can’t speak up for themselves, therefore my hope is to do that as a career.”

The NHS junior, a member of the school’s leadership team and Key Club as well as the track squad, is not a Newberg native.

“We moved here the summer before third grade from Portland,” Klink said. “We lived in a very unsafe part of Portland, and we moved here so I could have a safer childhood.”

She lists her parents, friends and NHS business and leadership teacher Kaylee Tolley as her greatest supporters.

“She has been a huge support throughout the school year,” she said of Tolley. “She cares about her students on a personal level and makes them feel so cared for. I always feel like I can go to her for anything.”

Klink has been accepted to participate in a Newberg Rotary exchange program this summer, a particular point of pride, as is succeeding during a tough time in anyone’s life — the teen-age years.

“This may sound simple and silly, but I’m also just proud of myself for adapting to all of the changes around me,” she said. “High school is hard enough without social media and a pandemic interfering, and I think I’ve handled it well.”