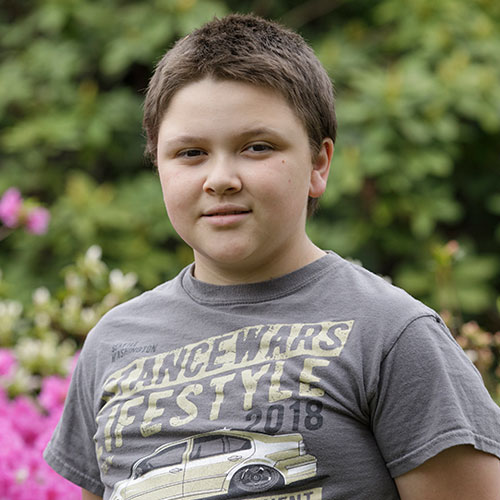 2021 Amazing Kids - Portland Tribune - Portland
Age: 10
School: Powell Butte Elementary School
Hometown: Portland, Or
Why he is Amazing: The spirit of giving: Not yet a teenager, this fourth-grader dedicates much of his time to thinking about those less fortunate than himself.

This kid’s gift is giving

It is better to give than to receive.

That’s a lesson many adults in the world don’t seem to have quite grasped, but a Portland fourth-grader already has made it his mantra.

Grayson Hosking, 10, has decided to make the art of giving his go-to response to anyone in need. “It seems really fun to help. Just ’cause,” the Powell Butte Elementary School student said. “Also, one of my friends, he went to one of the hospitals that I did charity for. I thought, ‘Hey, maybe I should start doing more.'”

While Grayson is shy about detailing his many charitable causes, his mom, Cindy Hosking, is less so. “Hey, I’m going to toot his horn!” Cindy Hosking said, laughing. “He’s like, ‘Oh, it’s no big deal.’ But it is a big deal. He’s the next generation. For me, this is so important.”

Here’s just a few examples of volunteerism and charitable giving from Grayson’s young life. During the most recent snowstorm, Cindy Hosking looked around, couldn’t find her son, then spotted him outside, shoveling the driveway of elderly neighbors.

When the family received federal stimulus money due to the pandemic, Grayson asked if they could give half of it to charity.

“He’s always the first when there’s a new kid in the neighborhood to say, ‘Hey, let’s go play,’” his mom said.

“It just makes you happy,” Grayson added. “Doing this means kids get to live life like other kids. You know the kids who didn’t have any toys? Well, now they do.”

For the fourth year in a row — nearly half of Grayson’s life — he is raising money for a charitable cause. He hasn’t selected this year’s charity, and his mom said Grayson will make that call. Last year, he raised a bit more than $1,000 for My Father’s House, a nonprofit agency that began in January 2001 because of the overwhelming need for family-shelters in Oregon.

Other recipients selected by Grayson: The National Center for Missing and Exploited Children, a private, nonprofit organization established in 1984 by Congress. And Doernbecher Children’s Hospital, the academic care facility associated with Oregon Health & Science University.

“My husband and I don’t pick these,” Cindy Hosking said. “I always leave it up to him.”

Cindy Hosking works for Landmark Tax & Investment Service in Gresham. President and owner Christy Brewster Kinsey at Landmark has gotten in on the act, too, Cindy Hosking said, offering to match funds raised by Grayson.

Grayson’s dad, Devin Hosking, is vice president of a sheet metal workers union and works at Myers Container in Portland. He’s also known for a popular — before the pre-pandemic — weekly car meet under the Morrison Bridge, which often drew as many as 5,000 car enthusiasts and, at its height, more than 2,000 cars. When Grayson isn’t in school or out giving to those in need, he can be found with his dad in the garage, working on cars, Cindy Hosking said.

His parents are no strangers to the art of giving, either. They’ve been supporters of SnowCap Community Charities, a Gresham-based philanthropic organization created to provide food, clothing, advocacy and other services to the poor.

Grayson’s drive to help others started early, his mom said.

“His tooth fairy money went to charity,” she added. “It all stemmed from a friend he had at school who didn’t have anything. Grayson told me, ‘He didn’t have a home. How can we fix that?’ And I said, ‘Well, we can’t fix that. But what can we do?’”

And Grayson’s answer has stuck with him since — Give.