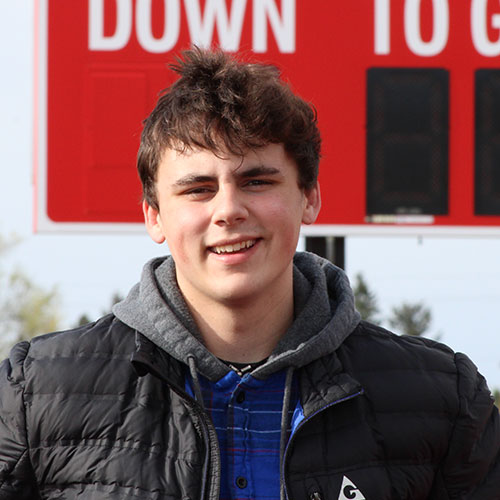 2020 Amazing Kids - Madras Pioneer
Age: 18
School: Culver High School
Hometown: Culver, Or
Why he is Amazing: Clayton is a leader on the field and in the classroom. He displays gratitude and incredible resilience.

If someone had told Brad Kudlac that he would be nominating Clayton Mathews for an excellence award from the Culver School Board back when the student was in middle school and Kudlac was principal there, Kudlac wouldn’t have believed it.

But in March, the board presented its Torch Award for excellence to Clayton, a Culver High School senior, making him the first student to receive the award.

Clayton, 18, has been raised mostly by grandparents Lori and Mark Owen, as his parents have not been a consistent presence in his life. The award was to acknowledge his remarkable success in overcoming very difficult family circumstances to become an exemplary student. Clayton maintained strong grades throughout high school and participated in football and basketball for three years. This spring would have been his third season running track had the COVID-19 pandemic not ended the school year early.

The award came with a trophy and a certificate, but Clayton says he will treasure the letters from his coaches and teacher the most, along with the praise from Kudlac. The letters in support of his nomination emphasize his resilience, work ethic and leadership skills.

Clayton got a little teary when the board read aloud the letters from his teacher and coaches, especially coach Shea Little.

“Stuff that he said kind of made me choke up because it reminded me of football and how much I miss being there with him and all the people,” the teen says.

Little, who is the head football coach and athletic director, writes, “Clayton Mathews has developed into an amazing leader both on and off the field. He has chosen the high road in every situation in his life. His maturity is above and beyond any student his age. He has fought through some adversity in his life and has chosen to take that adversity and turn it into a positive learning experience.” Lori Owen said her grandson has always been mature for his age and was very protective of his two younger siblings from a young age.

“He’s an old soul,” she says. “He was the protector of the family. When he came to live with us permanently, we had to tell him, ‘You can be a child now. You’re not the dad.'”

Still, Kudlac says, Clayton was a challenging student when he started at Culver Middle School in eighth grade.

“He did the biggest 180-degree turnaround I have ever seen in a student,” Kudlac says. “Ever. Clayton went from one of the worst students to one of the best students.”

In fact, in presenting the award to Mathews at the school board meeting, Kudlac began by asking Clayton about their relationship when he was in middle school, and Clayton said, “I hated you.” “The feeling was mutual. He didn’t like me, I didn’t like him. He caused a lot of problems with his teachers; he got bad grades,” Kudlac says. “And now he’s the completely opposite type of person. He has become one of my favorite kids that I have ever been around.”

Kudlac attributes Clayton’s turnaround to perseverance and exceptional intellect. Whatever the reason, he made a fresh start in high school.

Language arts teacher Wendee Bowen writes, “Clayton Mathews is an amazing student and human being. I have known him for the past four years. As a student he has never changed. From his freshman year until now, he has been on a course for success. Clayton is a young man that is a natural leader. Students look to him for leadership. He is kind and will do whatever is asked of him. Clayton is respectable in and out of school.”

Basketball coach John Spinelli writes, “No one works harder than Clayton, and no one has improved as much as he has in the past two years. Clayton was always very appreciative and was the only player to say thank you after every practice. Clayton has not let tough situations in his past affect the type of person and player he is today, and I know he will be successful at whatever he does in the future.”

Clayton’s future includes going to Central Oregon Community College next year. He had planned on going to Western Oregon University, but the coronavirus pandemic convinced him to stay closer to home for now.

This spring, Clayton is working four days a week babysitting his three young cousins in Bend and taking an online course through COCC. He will have 14 credits under his belt when he starts college next fall.

Longer-term, Clayton’s aim is to study law, inspired by a mock trial class he took at Culver High School his sophomore year. It’s too early to decide on a law school, but Clayton says he wants to stay in Oregon.