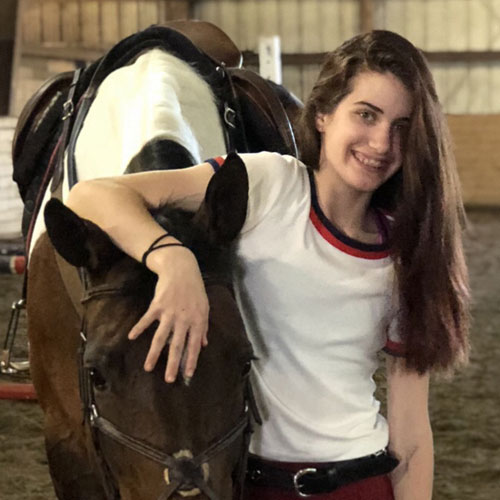 HORSES REMIND US TO 'NEVER QUIT'

For Oregon City’s Cambria Taylor, she isn’t going to let the bond between her and her equestrian trainer by impacted by a global pandemic or her trainer’s battle against breast cancer.

Cambria began riding and training with Vicki Zacharias at Rain Creek Farms in November of 2017 at the age of 12. Cambria soon developed a strong working relationship with Zacharias at the stables in the Redland area of unincorporated Oregon City. However, shortly after Cambria began training, Zacharias was diagnosed with brain cancer.

Zacharias had a wealth of knowledge to offer Cambria in the hunter/jumper discipline, and Cambria was eager to learn as much as she could. Cambria didn’t want to stop training with Zacharias for as long as that would be possible.

“She believes in me, and I believe in her as my trainer, my mentor and as someone that never quits, even when faced with something like brain cancer,” Cambria says.

As Zacharias began undergoing treatment for her cancer, Cambria wanted to help in any way that she could to make things easier at the stables. She offered to come out several days a week and ride/hack the school’s horses, turn out or bring in horses from the pasture, or clean up around the barn.

From sweeping aisles, painting jumps, or pulling weeds, Cambria never hesitates to help. Zacharias says Cambria is a “real pleasure” to have at the barn.

“Cambria is a very pleasant young lady that loves horses and isn’t afraid of the hard work that goes into having them,” Zacharias says. “She is always right there to help, including riding some extras for me. She is a great student with a wonderful attitude.”

Greg Klott says he’s had the pleasure of knowing Cambria for a few years while keeping his horse at Rain Creek stables.

“Cambria is one of those special individuals where you know when first meeting her, she is indeed an amazing kid,” Klott says. “She has a most kind, selfless, patient, respectful and humble demeanor about her. She is an amazingly accomplished, talented and fearless equestrian for such a young person. She’s constantly going above and beyond at the barn assisting the owner/trainer with exercising horses, feeding, bathing, cleaning, painting jumps, pretty much everything.”

Klott says Cambria does not hesitate to help everyone at the barn. “You name it, and Cambria is right there accomplishing it with an amazing attitude and always a smile,” he says. “Everyone at the barn, people and horses, absolutely adore Cambria. We all wish to see her a great horse trainer someday. However, Cambria will no doubt be great at any vocation she chooses.”

Cambria says she has been riding horses since she was 6 years old, but before meeting Zacharias, she has never had a bond so strong with another trainer. Going the extra mile while out at the barn, as far as Cambria is concerned, sets her up for a good work ethic for future jobs and makes her a well-rounded equestrian and more capable of riding whatever horse may come her way.

“Vicki has far and away given me more opportunities than any other trainer to learn and develop as a hunter/jumper,” Cambria says. “She always pushes me to be better than I think I am capable of and makes me think about what I am doing with each ride and to get better and to push it to the next level. I will forever be grateful for the environment at Rain Creek Farms and everything that Vicki Zacharias has done for me. I volunteer because I could never repay her for what she has done for me and for believing in me.”