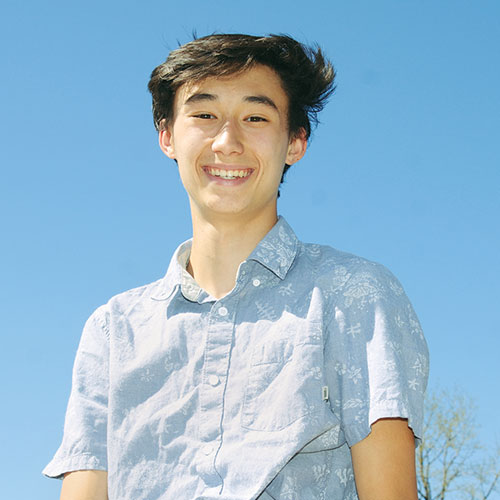 2021 Amazing Kids - Newberg Graphic - Newberg
Age: 18
School: Newberg High School
Hometown: Newberg, Or
Why he is Amazing: Tatsumi’s relentless positivity has proven crucial for his classmates in navigating the challenges of the pandemic.

Sunshine on a cloudy day

For young people throughout the country, the COVID-19 pandemic has been a scary and uncertain time. Students spent months away from the classroom and away from their friends, thrust into situations that isolated them from what it truly means to be a kid.

During, before and after that time, Newberg High School senior Asher Tatsumi has been a source of constant positivity for friends, classmates and fellow community members. It’s why he was selected as the Newberg Graphic’s 2021 Amazing Kid of the year.

“Asher is one of the most positive students I have ever worked with,” NHS assistant principal Mark Brown said. “During the pandemic, Asher has continued to bring a positive attitude as one of our ASB student leaders. He has made countless videos that we have sent out to encourage our students and staff. He is one of a kind and deserves to be recognized because he is kind, compassionate and has a positive impact on everyone he interacts with.”

Tatsumi is active in ASB at the high school and leads the NHS boys cross country and track teams. His positivity and friendliness are matched only by his skill in distance running, which contributed to a Pacific Conference championship for the Tiger boys cross country squad on April 9.

Joining the cross country team as a freshman was an important decision for Tatsumi, as it led him down an extracurricular path that would prove important in his life.

“I had a couple senior friends my freshman year who were on my cross country team and they said they saw potential in me,” Tatsumi said. “They invited me to join ASB and Mark Brown encouraged me to do so as well. I ended up running for ASB and got on.”

Those early inroads helped launch Tatsumi’s high school career and the positive impact he’d have over his four years at NHS.

“I love to spread love and positivity at school. That’s what I’ve tried to do the most,” Tatsumi said. “We changed the name of assemblies to pep rallies and I was one of the co-leaders of the pep committees that would decide what we’d do at those.”

Before the pandemic, Tatsumi would often get to school early — before 7 a.m. — to greet his classmates in the hallways. He’d often tell as many people as possible to “Have a great day!” and catch up with those he knew better than most.

“I know that high school is rough for a lot of people,” he said. “I just want to make sure that everyone has someone to talk to and everyone has a friend who brought positivity whenever possible. Something as simple as telling someone, ‘Have a great day,’ can make a big difference.”

With students in distance learning during the pandemic last year, Brown and Tatsumi hatched an idea for “Motivational Monday,” which included a video from one of them to post for students and the NHS community while they were stuck at home. The videos were about a minute long and often featured Tatsumi providing a challenge for students that involved some form of kindness or motivation as they navigated the struggles of the pandemic.

Returning to sports provided an outlet for Tatsumi, too, as he rejoined his cross country teammates for a shortened season this spring. That experience, he said, provided a much-needed burst of positivity for himself and his fellow athletes.

“I’ve loved every minute of playing sports,” he said. “In team sports like cross country, you’re doing mile after mile, week after week, and there are times where it gets frustrating, like life. But you have to do it for your teammates, your coach and yourself.”

Tatsumi is headed to Southern Oregon University in the fall and will compete on their track and cross country teams. He will study business and marketing and also attend the university’s honors college.

Wherever he ends up career-wise — which he said is up in the air at the moment, as it is with many people his age — Tatsumi has proven through his words and actions that he will be a positive influence on those around him. In challenging moments like this one, it is much needed.