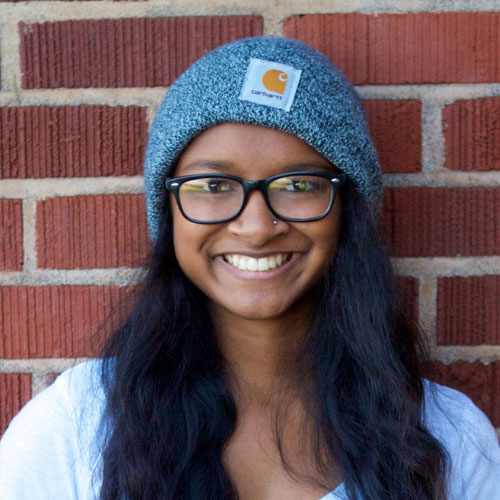 2020 Amazing Kid - Gresham Outlook
Age: 18
School: Barlow High School
Hometown: Gresham, Or
Why she is Amazing: She's working to help children to become comfortable with prosthetic limbs through her own experiences.

INSPIRING OTHERS THROUGH SHARED EXPERIENCES

During a Christmas party in 2018 for the patients at the Portland Shriners Hospitals for Children – Pediatric Orthotic and Prosthetic Clinic, Ari Wallace made a friend.

She met a 5-year-old girl who she felt a connection with — both had similar prosthetic legs. Though the little girl was shy and nervous being in the crowded space, by the end of the night she and Ari had become fast friends.

“I was able to make her feel more comfortable,” Ari says. “Being there with her and showing all the fun things happening that we could do together.”

Uplifting others has always been something Ari has been drawn toward, be it through her time as a volunteer in the community or supporting her peers at the prosthetic clinic as a patient and intern.

The Barlow High School senior is a congenital double amputee — she was born without her left hand or right leg below her knee.

“I’ve never known a life with having the limbs,” she says. “I learned how to navigate the world in my own way.”

Growing up in Gresham, two tasks that were made tricky because of her situation was learning how to swim and ride a bike. Both took a long time, and a lot of perseverance from Ari, to accomplish.

For swimming she said the first step was figuring out how not to drown, with most of her efforts spent learning how to get to the surface and tread water. Discovering how to ride a bicycle came from an effort to keep up with her seven cousins.

“I was always in the back of the pack with my training wheels,” she says. For Ari, the hardest part was getting the balance down. But when she was 13 and on a camping trip, she decided to give it another shot. She borrowed a cousin’s bicycle, and she says, miraculously, it clicked.

Because of Ari’s inspiring attitude and cheerful personality in the face of life’s hurdles, she has been named one of Pamplin Media’s 2020 Amazing Kids.

“I am incredibly honored to be nominated as an Amazing Kid,” Ari says. “Knowing I’ve been grouped with people who do amazing things inspires me to keep doing what I am doing.”

Not much slows her down. In her free time Ari loves playing basketball and hiking with her friends. Often she will find herself exploring the woods. Her family also enjoys kayaking on Mount Hood. She volunteers at the Multnomah County Animal Shelter on weekends and at her prosthetic clinic.

Ari is maintaining a 4.0 GPA at Barlow. Her favorite class is physics, because it answers the age-old question of “when will we ever use math in the real world.”

“Physics is where math and science unite,” she says. “In physics you see how everything comes together and can explain things in the world.”

She wants to go into the field of orthotics and prosthetics, something she had known since she was in eighth grade. Right now she is leaning toward the side of the field where doctors fit patients with prostheses, working with them face-to-face. It fits her personality, as she loves meeting new people and helping them however she can.

“I could be on the other side of things for someone else,” she says. Ari got to experience that firsthand this past summer when she completed a job shadow at Shriners Portland. She was able to follow practitioners and see what their daily lives look like. She learned how prosthetic limbs are made, what goes into finding the perfect fit for a patient, and everything else about a profession she has wanted to pursue.

“Some of the kids are shy and you have to talk to them for a while,” she says. “But others have experienced a lot of the same things I have.”

Ari will be attending Oregon State University for her undergraduate degree, with a plan to earn a bioengineering major. That is something her mentors at the Portland Shriners recommended as a good avenue to achieving her career goals.

“I have a really supportive mom and family who have been there for me through all the surgeries and college applications,” she says. “I love them for that, and because they know how determined I am with all of this.”

It hasn’t always been easy. Ari has had multiple surgical revisions to her leg so it continues to fit into the prostheses, which led to extended recoveries away from school and her friends. And when she returned it was on a knee scooter for a few weeks because of ongoing recovery. When Ari was in elementary school she would become frustrated by some of the repetitive questions she would face. Mainly, how it happened. But as she got older her mindset changed.

“It’s better that people are curious and want to learn about me and my situation,” she says. “I can show that having a prosthetic is not some crazy thing.” Her advice is to first ask if someone is comfortable talking about their situation. While Ari is open about her life, many other amputees are not.

“See how the person is and if they are comfortable answering questions,” she says.