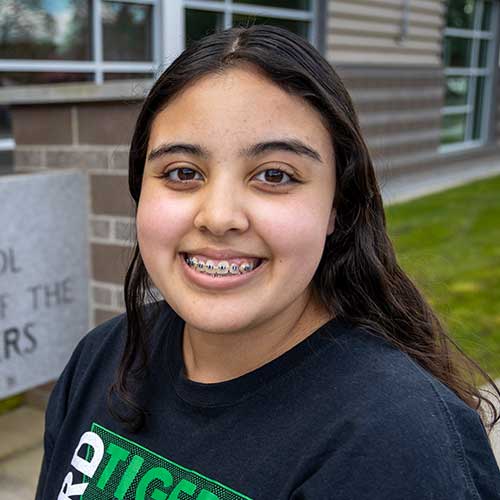 COMMUNITY MEANS EVERYTHING TO TIGARD JUNIOR

Angela Aguilar credits her community — family, friends, classmates and more — for supporting her throughout her high school journey, saying without them she wouldn’t be where she is now.
The Tigard High School junior is actively involved in a variety of clubs and organizations. Her mission: to make her school and community a better place.

One of the groups with which Aguilar is involved is No Place for Hate, which works to combat bigotry, discrimination and bullying. The group recently completed kindness cards where students sent cards to fellow students, teachers or staff “just to brighten someone’s day.”

Aguilar is also involved with the school chapter of MEChA, a nationwide student organization that promotes goals of leadership, cultural awareness, education and community service.
“It’s a really awesome affinity group,” she said.

Aguilar initially got involved with the group while a student at Twality Middle School, starting a chapter there and eventually becoming the organization’s vice president. She served as an outreach officer/social media director for MEChA — an acronym that translates to Chicano Student Movement of Aztlán — in her sophomore year and now helps run social media for the Oregon statewide chapter’s board of directors.

Aguilar has some family connections — her mother, Veronica Aguilar, is president of the statewide MEChA group. Veronica previously served as an advisor for the Tigard High School chapter back when she was a teacher at the school.

Angela Aguilar’s other activities include volunteering with Packed with Pride, an expansive weekly food box program in the Tigard-Tualatin School District begun during the COVID-19 pandemic to help those in need. Fluent in Spanish, she has served as the bilingual station greeter for that organization, helping out those families whose first language is Spanish.

While the pandemic has affected everyone so negatively, the food box distribution program is a positive aspect that came out of it, Aguilar says, bringing people together for a common cause.

In general, Aguilar says she likes volunteering because she enjoys creating safe spaces for students and giving them a voice. She served on the school resource officer review oversight committee, a group that made recommendations to the Tigard-Tualatin school board regarding what the roles and relationships should be between on-campus police officers, students and the school district.

“We all went in little groups, had discussions, and came back together and shared. It was amazing,” she said. “I was very glad to be given an opportunity to share the student perspective and really put my voice out there.”

When not busy with her affinity organizations, Aguilar is an intern for the school’s yearbook. She takes photos, conducts interviews and writes stories.

She also attends a social justice leadership class, where there’s discussion around topics such as racism, hate speech and mental health.

Aguilar said she will spend next year dedicated to preparing for college although she still trying to determine what she will major in.

“I’m not sure yet. I’m still I think exploring all the different opportunities and different degrees that I can get,” she said.

Still, Aguilar definitely has an interest in communications and social justice work. She has her eye on such schools as Linfield University, Portland State University and the University of Oregon. She also wants to spend her senior year making sure student voices continued to be heard and that everyone feels welcome in school.

Asked what she has learned in her three years at Tigard High, Aguilar said it’s realizing the importance of putting yourself out there.

She remembers being scared in her freshman year about getting involved in activities, something that has changed over the years.

“Honestly, once you get out there and involved, there’s such a great community and welcoming people that support you along the way, (people who) really helped you grow into an amazing person,” Aguilar said.