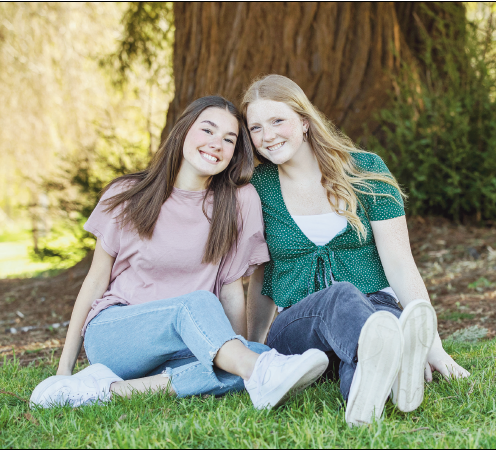 2021 Amazing Kids - Wilsonville Spokesman - Wilsonville
Age: 15
School: Wilsonville High School
Hometowns: West Linn and Wilsonville, Or
Why they're Amazing: They helped raise over $50,000 for the Luekemia and Lymphoma Society during the Student of the Year campaign.

‘I don’t think I’ve ever been happier’

With sports and other activities put on hold during the COVID-19 pandemic, Wilsonville High School students Ainsley Kennedy and Makenna Wiepert’s schedules weren’t quite as packed.

But they still found a way to make good use of their time, conducting an effort that not only gave them real-world experience, but also provided ample funding for a good cause.

With the help of West Linn student Megan Emerson and other teammates, Kennedy and Wiepert led their team in raising over $50,000 for the Leukemia and Lymphoma Society as part of the Student of the Year campaign. For their work, they were chosen as Pamplin Media Group’s Amazing Kids from Wilsonville in 2021.

“They were incredible ambassadors and volunteers for our organization,” said Jennifer Standifer, the campaign development manager for the campaign. “They excelled beyond our expectations and wants for students that come into the program.”

Along with many others, the issue of finding a cure for cancer hit close to home for Kennedy. Her great-grandfather continues to battle leukemia and lymphoma.

“He definitely tries to not show he’s struggling, but you can tell talking to him over the phone he gets exhausted really quick,” Kennedy said. “It’s hard to see anyone go through that, especially because he’s older and has lived such a good life.”

Wiepert said she knows many people in the community who have dealt with cancer, making her motivated to join the effort to eradicate the disease.

The girls spent seven weeks fundraising, which entailed sending letters and emails, meeting potential donors face-to-face, interviewing a Wilsonville High student who had battled lymphoma and offering auction items including a trip to Hawaii, a horse ride and fitness package. Kennedy collected donations from approximately 60 people, according to her campaign website

Kennedy interviewed CEOs of two major companies to attract donations and was successful in both instances. “(It was) a little intimidating. But we had meetings to prep for it before and I felt pretty confident going in,” she said. “I know I’m doing something amazing. It feels so good helping people and I feel like a lot of people are supportive of that.”

Kennedy and Wiepert were also leaders of the team and had to keep people engaged, assign tasks and manage meetings.

“They took that all on,” Standifer said. “They made incredible strides, especially with balancing schoolwork and other extracurriculars on top of that. They did it flawlessly.”

Kennedy and Wiepert said the campaign proved successful in part because they are well organized and solutions-oriented people.

“We worked very well together. If someone suggests an idea, we’re like, ‘How do we do it? What are the pieces we need to put together?’ We’re not people who procrastinate,” Wiepert said.

The money from the campaign goes toward research to try to find cures for leukemia and lymphoma, assisting families and patients, counseling and advocacy. When all was said and done, Kennedy and Wiepert’s team finished second out of seven teams in money raised. With the work finished, they were able to take a deep breath and ponder what they had accomplished.

“It felt amazing. It went by so fast,” Kennedy said. “I look back on it, and during those times, I don’t think I have ever been happier because every day I knew I was helping people and making a difference.”