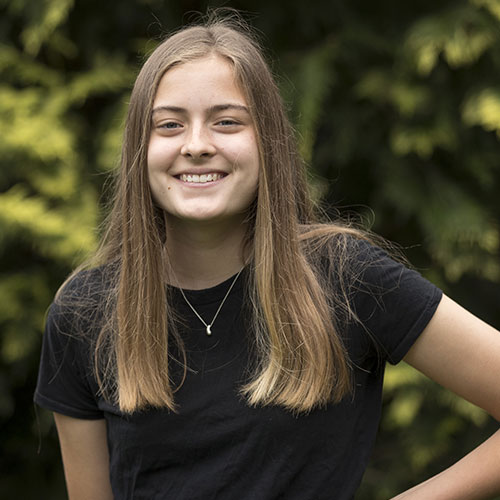 Age: 16
School: Tualatin High School
Hometown: Tualatin, Or
Why she is Amazing: Taryn has been a regular volunteer at school, around town and at local non-profits for years. She has even organized her friends to help out.

TUALATIN TEEN IS ALL ABOUT VOLUNTEERING

Remember when you were a kid, and your birthday was that one special day in the year when your parents and friends had to let you decide what to do?

A rising junior at Tualatin High School, Taryn caught the volunteering bug at an early age.

“We’re always on the hunt for different things,” says her mom, Katie Coulson. She adds, “It started out that we would work at Oregon Dog Rescue, or do some things like that, but then she’s kind of taken it where, for her birthday, she invited all her friends to work at the food bank, or the other birthday, for the Oregon Dog Rescue.”

It’s not that Taryn doesn’t have hobbies. She’s an athlete (volleyball and tennis) and a musician who plays cello in the school orchestra. She’s also involved with school clubs, like the Kindness Club, for which she recently took on an officer position.

“A lot of my friends do love volunteering,” Taryn says. “I think it’s kind of just a way for us to get together and hang out, but also feel good about what we’re doing.”

Now 16, Taryn has been a leader among her peers since long before high school.

In sixth grade, Taryn says, she and her friends signed up for a week of volunteering through TEAM Tualatin.

“At first, I was kind of recruiting them, and a bunch of them were like, ‘Oh, I’m not really sure if this is for me,’” Taryn recalls. “And then by the end of the week, they were like, ‘Oh my gosh, why can’t we go another week?’”

From volunteering at different food banks, including the Tualatin School House Pantry in Stafford, Taryn has been able to get to know people and families who are food-insecure. In other words, they don’t always know where their next meal will come from or what they will be able to afford.

“I got to meet a lot of people who are experiencing hardships in their life,” Taryn says. “I just like to have empathy for them and learn about what they’re going through, but also show (them) that anyone’s approachable for help, and that if they need something, there’s always people there for them.”

In many cases, she points out, food-insecure people may not be adequately nourished. Junk food — such as snacks laden with preservatives, high-sodium frozen dinners, and fatty, oily fast food — is often cheaper and more convenient to purchase than healthy foods like fresh produce and whole grains. A diet heavy in sugar, sodium and fat and light on vitamins and minerals can lead to more severe health problems, placing further financial strain on low-income households and sometimes shortening people’s lifespans.

While she hasn’t decided for sure yet what she wants to do after college, Taryn is considering a career as a dietician or nutritionist.

“I think of just promoting that and showing how you can eat healthy, but in a sustainable way (so) that everybody can do it,” she says.

When Taryn was in kindergarten, her mom was the leader of her Girl Scout troop. Between Scouting and volunteering with her family, Taryn got an early exposure to how rewarding it can be to help others.

Today, Katie Coulson admires the person her daughter has grown to be.

“How do you care about other people … and think about your society and community?” she asks rhetorically. “I think that’s really important, and it’s important for me. That’s how we can help other people. And so I like that we started doing that together, and then now, she’s asking her friends and really doing it on her own.”