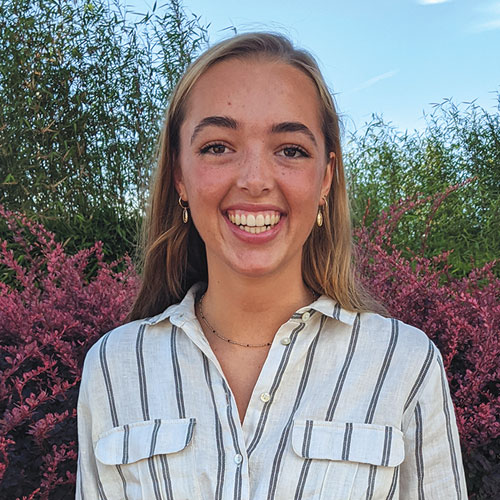 2020 Amazing Kids - Pioneer-Herald - Canby
Age: 18
School: Canby High School
Hometown: Aurora, Or
Why She is Amazing: Karly took her love of art and turned it into a business that is on the cusp of going nationwide, all while learning about business, marketing and herself.

Joy and optimism radiate off Karly Bierma from the moment you meet her until she walks back out the door. Karly carries with her a spirit that’s hard to define, yet is wonderfully easy to enjoy.

And it’s that spirit that has led her down an unexpected entrepreneurial road at a relatively young age, a road that includes her selection as the Canby-area Amazing Kid for 2020.

Karly, 18, just graduated from Canby High amid the COVID-19 pandemic. And her philosophy of life is one of the things that has seen her through what has been a whirlwind two-plus years — not only as a teenager navigating high school, but as a young businesswoman learning important lessons along the way.

“I think that as far as my life right now, even when I was younger, all I saw was opportunity,” Karly says. “You can do anything if you put your mind to it and believe in yourself. That’s something that’s taken me where I am today. Recognize the things you’re grateful for and that will overpower all the things that aren’t going so well in your life.”

It’s that philosophy and go-for-it mentality that turned a passion into a business that is taking off in unexpected ways.

Growing up on a 75-acre farm in Aurora, Karly says she knew from an early age that art was going to be part of her life. Along with doing chores and learning the important lessons of responsibility, Karly says art was something she connected with early on.

Her passion started to really ignite in fifth or sixth grade, then took on a little different intensity as a seventh grader when the plain white walls of 91 School called out to her for color and vibrancy.

Denied the chance to create a mural on one of the walls initially, “I ran home, made a full layout, got paint donated, organized a committee, then came back about a week later with a full plan and got a ‘yes,’” she says.

Karly realized that she wanted to share her passion, her creations with a larger audience. But how? “I started selling my art in the beginning of high school at markets and coffee house shows, but I just didn’t see the potential in people buying originals,” Karly says. “That’s kind of where my idea for the stickers came from. I wanted to make it easy, convenient and affordable for people to buy my art.”

Things got rolling in November 2018 when, through a website that would turn scans of her unique art into stickers, Karly ordered her first set of custom stickers.

A post on Instagram got the ball rolling. Soon, she was selling her stickers in the hallways of CHS. Two weeks after she got her order, the stickers were gone.

“Once I realized I’d kind of saturated the high school market at Canby, the next step was retail marketing of the stickers to stores,” she says.

Karly hit up stores each weekend across Canby, Oregon City, Newberg, Sherwood and other locales. A store in Oregon City proved to be a doorway to a much bigger world for her creations.

“In April 2019, a group of gift representatives saw my stickers in Oregon City and asked how to get ahold of me. I was playing tennis and literally freaked out,” she says.

Those middlemen were able to expand her line into stores throughout the Northwest and she had sales of more than 17,000 stickers by the end of summer.

“It was insane,” she says. “That’s when I was forced to realize that this was a business. I had to figure out invoicing, credit cards, all that fun stuff, during the summer of 2019. I love it because you are in charge of yourself and there’s no one telling you what to do.”

But even as Karly makes plans to attend college at the University of Oregon this fall, there’s something big brewing with her sticker business.

“I wanted to go across the country with my stickers, so I started reaching out,” she says. “I got a call back from Diverse Marketing, one of the biggest toy representatives in the country.” Karly visited with them in February and had arranged to get the ball rolling when COVID-19 hit. However, the hope is that once things find some normalcy, her dream of a nationwide distribution for her art via stickers will kick in.

Karly also finds time to play tennis and was on the state third-place Canby High volleyball team in the fall. She also has volunteered at Rackleff Place, conducting art classes.

Karly served as president of the Interact Club, a student Rotary organization, while at CHS, and snagged a Nordstrom internship this past year where she was able to learn about retail activities, marketing and gain a deeper understanding of the fashion industry, another thing she loves.

“I have had so much support through all of this — my parents and my two sisters,” she says. “The community and high school teachers and my fellow students, the Canby community has been so supportive, and I am very grateful for all of it.”