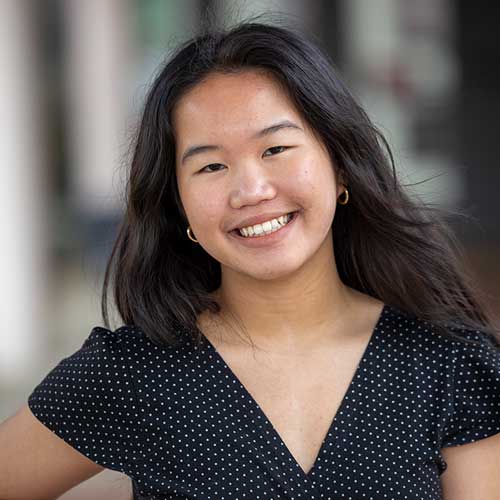 ADVOCATING FOR A BETTER WORLD

Tualatin High School senior Emily Phuong Tran likes to take the time to listen and appreciate everyone she comes into contact with, the end goal being to walk away with a better knowledge for everyone’s individual diversity.

And if there’s a disagreement on a subject, she’s open to that — as long as it’s a peaceful disagreement.

Having lived in Vietnam for the first 11 years of her life, Tran moved to the United States when she was in the sixth grade. Here, she has found everyone kind and welcoming, she said.
Throughout her time at Tualatin High, Tran has taken on the role of being an advocate for students.

Not only is she president of the school’s associated student body, the student government at the school, but she is also general president of the Tigard-Tualatin Student Union, a student advocacy organization that represents both Tigard and Tualatin high schools.

Tran says her most memorable accomplishment during her high school career came over the last two years when she led the charge to have free menstrual products placed in all Tigard-Tualatin School District girls’ bathrooms. Based on successes of policies in the Portland and Eugene school districts, and banding with the group Period, which distributes free menstruation products to communities in need, Tran started the push to have the products available districtwide in May 2020. She collected 350 signatures of support.

“Because we already had those signatures to prove that now we had popular support, it was just about working with district leaders to … calculate the funding and make sure we can actually make the timeline,” she said.

While the Menstrual Dignity Act was passed by the Oregon Legislature and signed into law last summer, it only requires menstrual products to be placed in two school bathrooms. But Tran and her supporters ensured that they would be available in all girls’ restrooms in Tigard-Tualatin public schools.

As Tualatin High School’s student representative to the Tigard-Tualatin School Board last year, Tran said she learned the importance of building relationships.

“I really got to know everyone’s role and understood how their department worked and that aided us this year in our advocacy work (as part of the student union),” Tran said. Her takeaway when dealing with the district officials and others is that in the end to get things done, you need to “put your head down, read the documents, make the speeches and really prepare.”

“It’s very mundane work, but it’s very important. You’ve got to do it,” said Tran.
She also helped work on an extracurricular activity equity proposal that included eliminating the so-called $225 pay-to-play fee that students pay to participate in school sports and other activities.

In addition, Tran worked with the Tigard-Tualatin Student Union and school board chair Ben Bowman in helping to create a districtwide anti-racism policy.

Right now, she’s an intern for Sen. Akasha Lawrence Spence, who represents Tigard and Southwest Portland in the Oregon Senate.

At the end of the day, Tran says her goal is to work with different people, “have different groups come to the table and figure out solutions.”

Next year, she’ll be on her way to study government at Harvard University. She believes focusing on marketing earlier in her high school career will be beneficial when it comes to her specific career, whatever that might be.

“I just realized a lot of skills used in marketing (are) also used in politics and government,” Tran said.

On April 14, Tran watched as her parents and as many as 500 others took their oaths to become naturalized U.S. citizens during a ceremony at the Oregon Convention Center. Tran herself is also in the process of gaining citizenship.

It was as the names of the 81 countries represented at the ceremony were read that she realized that she had never been in a room that was so diverse, Tran said.

“Everyone was so joyful and proud of their journey, and the experience really affirmed my gratefulness to be in a nation of immigrants,” Tran said.