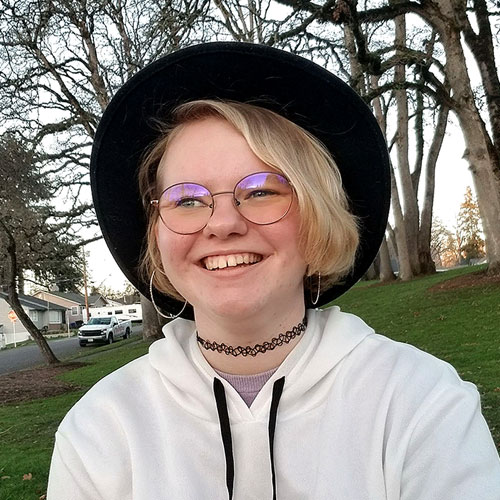 2021 Amazing Kids - Clackamas Review - Gladstone
Age: 16
School: Gladstone High School
Hometown: Gladstone, Or
Why she is Amazing: In addition to volunteering on the school’s Gender & Sexuality Alliance, Sammis put in dozens of hours for neighbors after February’s ice storm.

During the ice storm in February, Gladstone was hit particularly hard, as heavy freezing rain brought down trees and power lines all over town.

Many folks suffered damage to homes, cars and fences, and many families went without power for as long as 13 days.

But to the rescue came Gladstone Ice Storm Mutual Aid, a team of community volunteers that quickly formed to help their neighbors handle the hard work of clearing away damaged trees and downed branches to keep people safe. With chainsaws, trucks and rakes, they chopped wood and cleared debris. It was a lot of heavy, physical work.

By all accounts, one of the hardest workers was Dy Sammis, who contributed 34 hours to the effort. Dy’s brother Jack, a senior at Gladstone High School, was a close second after contributing 31 hours of heavy physical work to a large team of adults and students that helped 41 neighbors over a 10-day period.

“It was tiring as heck, but I got to meet so many wonderful people who brought us water bottles and helped us in their yards,” Sammis said. “It really showed how much community Gladstone has.” Sammis’ father, Dieter Sammis, provided the large pickup and flatbed trailer that volunteers used to haul about 20 loads of downed debris to the city-sponsored dump site at Meldrum Bar Park. He credited Dy with working “every day after school until we were done,” then completing homework afterward. “Jack was close to the same,” he said. “With that said, all of these kids deserve some recognition for their hard work to help others.”

Selflessness shown by the volunteers did not go unnoticed, including by newly elected City Councilor Annessa Hartman, who advertised on social media about this “team of awesome neighbors cleaning up the storm debris from neighbors who request help.”

“In the Gladstone School District, our mission is Growing Great People,” said district spokeswoman Leslie Robinette. “This spirit of volunteerism to help neighbors through a crisis is a fantastic example of the helpful, hard-working students Gladstone is so proud of. These kids are our community’s future workers, leaders, neighbors and parents, and clearly they are already stepping up to serve.”

Sammis said the recognition from the city was unexpected, not to mention getting honored regionally as an Amazing Kid by Pamplin Media Group.

“Everyone who did it was amazing and it was just a group, community effort, but it was an honor to be part of so much fun,” Sammis said.
Other kids who helped were GHS senior Keira Rowles (15 hours), GHS junior Gabe Seymour (12 hours), Kraxberger eighth-grader Sady Miller and John Wetten fourth-grader Xander Sammis (four hours each). Their efforts were a blessing for many Gladstone residents who felt helpless and isolated by the storm damage and extended power outages.

“For legal reasons, we weren’t able to take limbs off cars or roofs, so we stayed away from dangerous situations,” Sammis said.

Residents responded to Mutual Aid group members by showering them with gifts and gratitude. Sammis thanked “one kind gentleman who does his own craftmanship” who gave the volunteers custom corks for putting on bottles, as well as a woman with equally impressive artistic talents who gave Sammis a painting of finches and a robin.

“We provide a safe space for students to be themselves and not have to worry about judgement,” Sammis said.