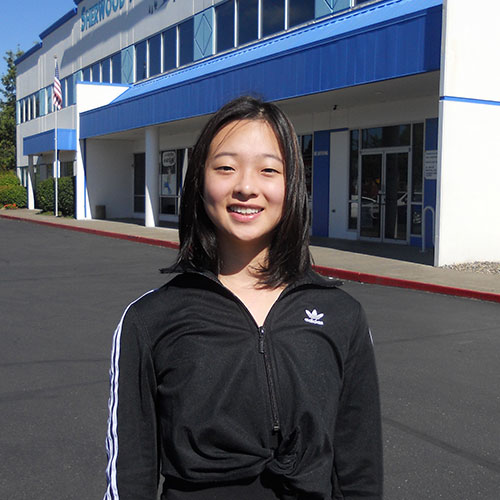 2020 Amazing Kids - Sherwood Gazette
Age: 18
School: Oregon Connections Academy
Hometown: Sherwood, Or
Why she is Amazing: Lee is a decorated figure skater and a regular at the local ice arena. She mentors young skaters and enjoys being a role model.

ROLE MODEL ON, OFF THE ICE

You might think this 18-year-old figure skater, who has spent several years and an unimaginable number of hours honing her skills at the Sherwood Ice Arena, would shoot for stardom in the Winter Olympics.

But Da Eun Lee is going to transition to the classroom as she heads from the Portland area, where she lives, to the University of Washington.

Danika, as she likes to be called, has been a fixture at the Sherwood ice skating facility. She not only entertains those around her, she likes to coach and encourage skaters. Danika was born in South Korea and moved to Minnesota when she was 3 years old. “From Minnesota, I moved to Oregon when I was around 8,” she says. “That’s when I started skating.”

Her desire to take up the skates was quite sudden.

“As soon as I saw this TV show or documentary about Yuna Kim (representing South Korea), the Olympic skater, it immediately made me want to skate,” Danika says. “From the start, I wanted to pursue the sport.”

Danika received plenty of support from her family, according to Mari Malama, her coach.

“I always really, really enjoyed working with her family,” Malama says. “Her family never put pressure on her to perform. They were always very, very supportive of her and me.”

With support from her family and those around her, it’s not hard for Danika to express her feelings on the ice.

“One of the unique things about her is she is creative and very expressive,” Malama says. “She’s a very emotional type of person. But she’s very good at expressing herself on the ice — she’s not afraid of looking like a fool or putting herself out there. She’s very genuine.”

Danika admits performing in the Olympics was an attractive goal.

“If I were to think of where I wanted to take it (her goal), it would definitely be the Olympics, that’s what I always had in mind,” she says.

But as she considered her age and thoughts about college, Danika realized she may have to let go of that dream.

“Now that I’m going off to college, that’s not really technically going to stop me from keeping my eye on the Olympics, because even though I might not be the skater out there, I could someday coach someone,” she says.

If you’re wondering how Danika could fit schooling into her several years of practice at Sherwood Ice Arena, she found a solution: Oregon Connections Academy. The academy is a tuition-free online public charter school that serves Oregon students grades K-12.

“Oregon Connections Academy allows me to take AP classes, take dual credit classes, and still get a good education — enough to apply to the colleges that I wanted,” Danika says.

“I think that was a very good opportunity for me,” she adds. “Being able to schedule my own day and having that flexibility was really great for me, especially because I traveled so much (to compete).”

“She has trained all over the United States,” Malama says. “She’s been to the Olympic training center in Colorado Springs, trained in Los Angeles with top athletes from all over the world. She’s had a ton of opportunities to work with world and Olympic coaches and skate alongside their skaters, even from other countries, the best in the world, so I think she has a lot to offer. She definitely has a very big bank of knowledge.”

Malama said Danika enjoys helping younger skaters on the team learn the sport. “We have younger kids who are 6 years old, some who are even younger,” Malama says. “The ages are all spread out, so our younger kids are always looking up to somebody else on the team, and she’s part of our second generation of pioneers. The younger ones definitely see her as a role model.”

She adds, “In the future, I don’t have any doubt that she’s going to teach in some capacity, in some form or another. … She has great potential as a choreographer, and I’ve already asked her to come back and work with our team once she’s done with school.”