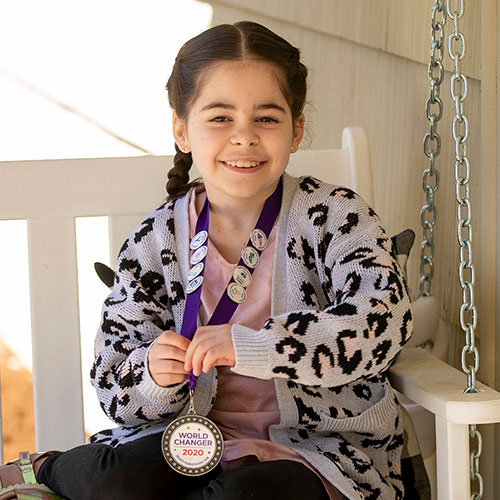 Clara Watson likes math, Harry Potter books and helping kids who, like her, have epilepsy.

She’s 8 years old and goes to school at River Grove Elementary School in Lake Oswego, where she brings awareness to her peers about the seizure disorder.

“She’s had epilepsy her whole life. It’s not something she’s embarrassed by. She’s proud of it. It’s part of who she is,” said her mom, Julie Watson.

Clara’s a member of the Epilepsy Foundations Kids Crew, a national program where kids learn about epilepsy and spread awareness in their communities.

“I like helping kids with epilepsy have a better life,” Clara said.

For one of her tasks, she spoke to her dad’s church about epilepsy awareness.

“Most of them said that they were related to somebody with epilepsy,” Clara said.

The book she read to her class taught other students what epilepsy is and how prevalent it is. For example, one in 26 people in the U.S. will develop epilepsy at some point in their life. And, 470,000 kids in the U.S are currently living with epilepsy.

“I wrote a letter to the governor saying that it should be a law that every kid with epilepsy at every school should have an aid,” Clara said.

“And that teachers should be trained in seizure safety,” her mom added. Clara learned about seizure safety through the Epilepsy Foundation.

“One of the things they’re talking about in Kids Crew and at the Epilepsy Foundation is about seizure safe schools. So, right now, only (seven) states have it be a law that all teachers and staff at public schools are trained in seizure safety, like they’re trained in first aid,” Julie Watson said. “But we want it everywhere, so I wrote the governor,” Clara added.

At River Grove, for example, only educational assistants and staff on recess duty are trained in seizure safety.

“It would be so great, given that there’s so many kids with epilepsy, that if she just went to school that any staff could recognize a student having a seizure — because there are so many different types of seizures — and be able to help them the same that they would if they cut their knee,” her mom said.

Becky Owens, a family friend, said when she saw that Amazing Kids nominations were open, Clara was the first kid to come to mind.

“Because when I think of an amazing kid — ‘amazing’ just doesn’t even cover what I think of her,” Owens said.

She said that watching Clara grow into someone who advocates for herself and others is remarkable. “Look out, because she’s going to do some amazing things in her life,” Owens said.

Her mom is proud of Clara’s determination to advocate for other kids with epilepsy, too.

“This is all her. There’s no parenting that caused this to be. She is just a very confident and special and capable girl,” Julie Watson said.

“I believe in myself to change the world — that’s what my mom is trying to say,” Clara said.