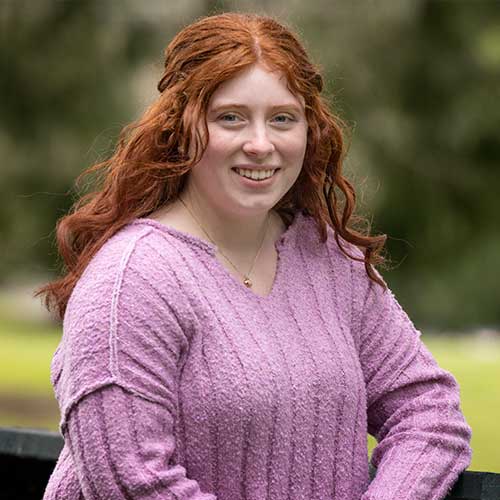 2022 Amazing Kids - West Linn
Age: 18
School: West Linn High School
Hometown: Hubbard, Or
WHY SHE IS AMAZING: Ava supports kids in crisis as a volunteer with Oregon YouthLine, a resource for teenagers who need someone to talk to.

"BEING ABLE TO TALK TO ANOTHER TEENAGER IS REALLY VALUABLE"

Three years ago, Ava Sechrist learned about Oregon YouthLine through a friend who volunteered with the organization. Today, Sechrist, a West Linn High School senior and 2022 Amazing Kid, works for YouthLine herself, helping kids in crisis and educating other students to destigmatize conversations about mental health.

Oregon YouthLine is a teen crisis line where young people in need of support can reach out to other teenagers trained in crisis intervention.

Sechrist, who plans to major in psychology in college, said she’s always been passionate about mental health, but working with YouthLine piqued her interest.

In 2019, Sechrist’s project “The Effective of Trauma on Emotional Intelligence” took second place in the cognitive psychology category at a regional science fair.

“It’s an area that we don’t know all that much about, so there’s a lot of room for growth,” she said. “We’re learning stuff exponentially right now. It’s super interesting to learn how people work and think and how we can best support people with that information.”

To start working as a crisis line volunteer with YouthLine, Sechrist went through 64 hours of training. Since then, she’s completed additional training, which has allowed her to take calls and messages from higher-risk contacts.

Sechrist said kids reach out to YouthLine for support with all sorts of things.

“Youth Line is there for anything from having a bad day, going through a relationship breakup or issue or a friend issue to someone who is struggling with suicidal ideation or self-harm,” she said. “We’re there for the full range of whatever anyone needs support with.”

Sechrist emphasized that YouthLine is a resource for teenagers to share what they’re going through without judgment.

“Being able to talk to another teenager is really valuable. You get a perspective that you don’t necessarily get talking to an adult,” she said. “You get someone who might understand a little better, who is likely to have been in your shoes or experiencing the same things you’re experiencing at the same time.”

Sechrist hopes she’s helped YouthLine callers by allowing them to say what they need to say but noted that the kids who reach out are doing the most challenging part.

“I’m there to listen for a little bit and hopefully that takes some of the weight off their shoulders for a minute,” she said. “It’s important that they have someone there to hold with them for a second what they are going through.”

The other part of Sechrist’s role with YouthLine is visiting schools in the area to teach students about mental health topics.

“It works to help get people talking, to destigmatize those sorts of topics and to show that YouthLine is a resource for people to reach out to if they need it,” she said.

Sechrist’s school counselor, Greg Bean, called her work with YouthLine, a “self-less investment of her time.”

He also said students and teachers see the care and sensitivity that are so important in working at YouthLine in their day-to-day interactions with her at school.

“She’s a phenomenal student,” Bean added. “She’s been recognized by her teachers as caring and compassionate.”