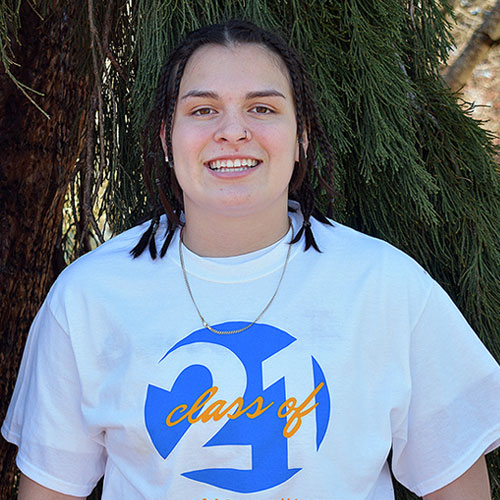 Abriana Hoffman and her mom turned the tragic 2014 murder of her older brother at Reynolds High School into a force for good by founding the nonprofit Emilio Inc.

Hoffman, known as Abi, volunteers with the organization to honor her beloved brother. “I want to become someone in my community and hometown to look up to. Show that there is growth out of these things. It is something I’ll carry with me the rest of my life,” said the 18-year-old Barlow High School senior and Troutdale resident.

Hoffman’s 14-year-old brother, Emilio, was shot and killed by another student at Reynolds High School in June 2014. Hoffman was 11 years old at the time.

“Abi has taken that scar and turned it into an inner toughness and determination,” said Patty Neuenshwander, who runs Barlow’s College and Career office.

She’s also turned it into compassion and work for the community Emilio Inc. honors her brother’s memory by helping children, improving mental health and spreading love in the community.

Hoffman is on the group’s youth board and has “dedicated her time and efforts to fundraising, event planning and shared educational experiences to improve the lives of others,” Neuenshwander said. The group holds a fundraising poker run motorcycle event every year, although the pandemic did alter the normal event in August of 2020. Emilio Inc. also has a car show, a big rummage sale, school supply drive and an indoor soccer tournament.

Funds go to children who can’t afford school supplies or have other needs. It also provides school counselors with gift cards that can be handed out to struggling students. “We help kids around the state who need extra help with back to school (and) with new clothes. Emilio liked to go school shopping,” Hoffman said.

Hoffman, her mom and others from Emilio Inc. traveled to Roseburg’s Umpqua Community College in October 2015 to provide comfort after a student shot and killed nine people and injured eight others. “We put love rocks down there and gave them support,” Hoffman said.

The group paints small rocks with bright colors and encouraging messages, then makes small displays with them when they think someone needs extra support.

“I love to paint them,” Hoffman said.

Hoffman is also an excellent student with a 3.75 grade point average and is well-known in high school sports as one of the state’s best soccer players.

Her brother Emilio loved to play soccer and Hoffman said she learned the game and got her passion for it from her brother.

Hoffman has been selected to play in the elite high school All American game in St. Louis in May. She was three-time Player of the Year in the Mt. Hood Conference. Hoffman also was a kicker for the Bruins football team.

She opted to attend Barlow High School instead of Reynolds because of the memories of their family’s loss at Reynolds High School, and also because she wanted to have her own identity.

“I didn’t want to just be Emilio Hoffman’s little sister, even though I love him and think about him every day,” she said. “It has been such a blessing to be there. It’s been a good place for me.” Hoffman will play Division 1 soccer at Portland State University in the fall, though she hasn’t got a major or career path in mind yet.

“Abi Hoffman is fully committed and determined to improve her surroundings, our community and the lives of others, even when the pain never truly ends,” Neuenshwander said.